Or, “Let’s walk until our feet fall off and then walk some more”

Saturday morning we decided to go do some exploring. The original plan was to “wander over to the Seattle Center, grab a pastry on the way, look at the Chihuly Garden and then maybe wander up to Queen Anne for lunch – maybe 3 miles of walking all in. We also debated going to Fremont, possibly by bus. This turned into a 9+ mile hike, of course.

NOTE: There are links to related web sites in the titles of each section below. Click on the blue text.

Map of our Tour

There’s a link below the map that will show a larger version.

Must. Have. Coffee! This has become my favorite coffee shop – it’s funky, they make a good Americano (and Lavender Mocha, according to Sargent), they’re friendly and the prices are reasonable. Can’t ask for more than that.

Stopped here to do some shopping. Seattle has a bunch of glass blowing studios, but this is the local one. You can go back and watch the glass blowers and they also offer classes. They also have an attached Thai restaurant for some reason.

Our local French bakery. Tasty, but we skipped this in favor of lunch later in the morning on Queen Anne.

Yep, it’s a tourist trap. We really do need to visit but there was a line so we skipped it.

This looks fantastic, but it was a bit pricey and we weren’t in the mood to do anything artsy – lunch was calling!

Our next stop as we wandered through the Seattle Center was the Children’s Museum – to make a trip to the restrooms. This building actually appears to house all sorts of things, with a food court on the ground floor that has food that appears to be quite a few cuts above the usual tourist trap fair. For our future reference, one of the locations was the Sweet and Savory Pie Shop (hint: they don’t specialize in Thai food), which we will be returning to visit.

Time for a hike – up Queen Anne Hill! For those of you keeping score at home we live about 30-40 feet above sea level and the top of Queen Anne Hill is roughly 450 feet. Most of that climb happens over about 6-7 blocks, which helps build up a nice appetite for lunch at The Five Spot at the top of the hill. This is one of our favorite lunch/brunch spots and they always deliver a tasty meal. The decor rotates regularly and is currently political, including a poll based on which door you enter (duh, we both went in the Left door, adding votes for Obama 🙂 ). Lunch was tasty as expected. 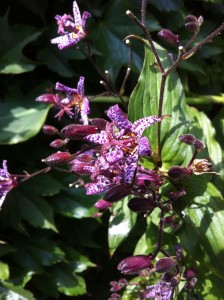 Inside The Five Spot 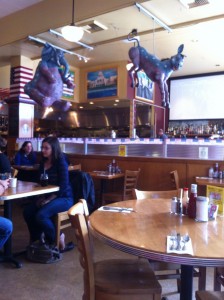 The elephant and donkey are attached to the front door and move when the door is opened. Of course, the left door moves the donkey and the right one moves the elephant.

A short walk down Galer Street from The Five Spot brought us to Molly Moon’s, our favorite ice cream shop (but only by a small margin – Cupcake Royale is closer and also makes some really good stuff – and they have cupcakes, too). Molly Moon’s Sea Salt Caramel ice cream is out of this world – you should fly out here and have some!

The day was sunny so we decided to wander down the north side of Queen Anne Hill to get to Lake Union and a bridge over to Fremont. 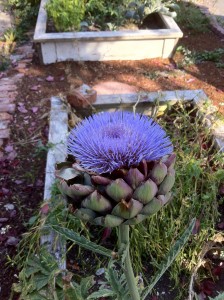 Here’s something I had never seen before: an artichoke that had been allowed to bloom. Looks kind of like a thistle, doesn’t it? There’s a reason for that – it IS!

As we reached the bottom of Queen Anne Hill, Sargent spotted a winery across the street – and a sign for a tasting room! Seattle has a number of wineries in the city and we’re learning that it’s not uncommon to run across one. They all bring in grapes from the various grape growing regions in Washington and Oregon and they all appear to have tasting rooms. Yum!

BYOB Vintners is mostly in the business of fermenting, blending and bottling wines for various private labels but they also have their own label and a number of different blends. We tried several and left with a tasty bottle of Garnacha. They are also starting to distill so we’ll be making a trip back in the near future. 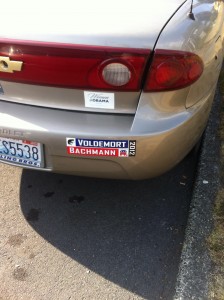 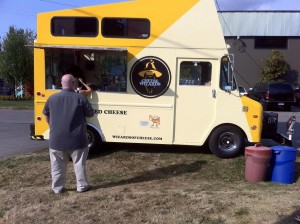 Wizards of Cheese – we shall be looking out for this food truck in the future!

From BYOB Vintners (and the Wizards of Cheese!) we headed to the Fremont Avenue Bridge across Lake Union. We trudged up the long, LONG hill and finally made it to The Book Larder, a bookstore that carries ONLY cookbooks! Sargent swore this would be just a “couple” blocks from Lake Union, but it turned out to be roughly 5 miles, all up hill in the snow.

The Book Larder is a truly magical shop: not only do the sell cookbooks (and brewing books, too) but they also make things from the cookbooks and then provide free samples! Fortunately we made it out with only two books (and some tasty cake) but we’ll be back. 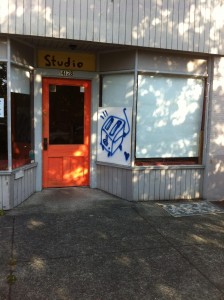 Spotted on a vacant(?) shop as we headed back down Fremont Avenue towards Lake Union.

Our last stop in Fremont was for a beer at The Dubliner. The bar itself was nothing special, but it was happy hour so our beers were $3.50 each – for something tasty and local.

Well, technically we stopped at Whole Paycheck first, but you don’t really care about that. The walk home was about 3 miles, but it mostly went along Lake Union and was a truly delightful walk. 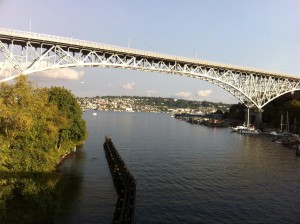 This is from the Fremont Avenue bridge looking East. 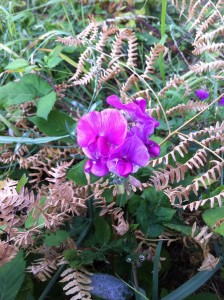 These are seen frequently along walking trails. We had a bit of a debate about whether this was a wild orchid or a sweetpea, but neither of us knows enough to really tell. “Pretty Flower” – that’s what I know! 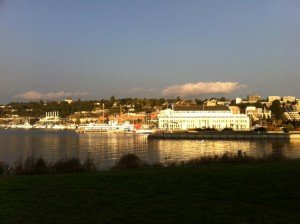 Taken from Lake Union Park. The big white building is about to be the Museum of History and Industry at Lake Union. 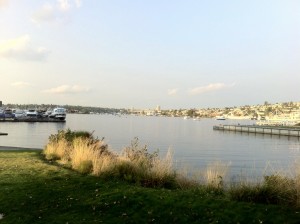 Looking North. The bridge in the distance on the right side of the picture is I-5. 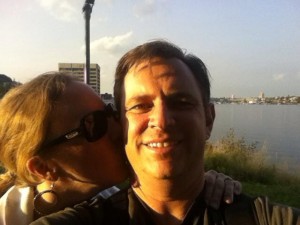 And that’s it! We headed home and collapsed.

2 thoughts on “Queen Anne and Fremont”